I just wanted to do a quick into for the book War World By Rod C Spence.  Over my winter break I was approached to review this book and it has taken me quite a long time to actually finish it it! Bt now I have so I feel confident in being able to finish up my review!

Below I will post the blurb from the back of the book as well as a short intro about the author! This is a good one guys so heads up! 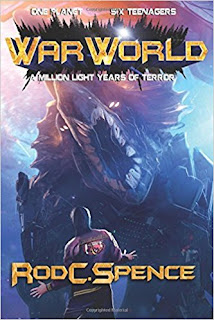 Jeremy Austin never asked to save a planet--it's bad enough being a "B" average student as the son of a world-famous geneticist for crying out loud! He didn't ask to be attacked by Gnome assassins, didn't choose to become food for a prehistoric monster, would never have thought consorting with wizards a wise concept, and he definitely would never, ever sign up to do sword combat against the bloodthirsty Gnome King.

Note to self: say NO to portals and wormholes. His father's expedition to a planet 2.4 million light years from Earth has gone missing. Jeremy and five high school friends embark on a rescue mission. Surrounded by an army of mercenaries, they travel through a high-tech portal and discover a nightmare planet on the other side--a violent world of alien races and man-eating monsters--a world in despair; anxiously awaiting the arrival of a savior who will defeat the evil Shadow Lord. For Jeremy, the search for his father becomes lost in a struggle for survival... and escape from those who would put the mantel of planet savior on his shoulders.


About the Author: (From Amazon)

ROD C. SPENCE is the author of the War World series and has spent decades as a creative cog in that great machine called television. What doesn't kill you makes you stronger, right? From the highs of 3 Emmy nominations as an editor on CBS's Survivor to a different kind of high on MTV's Jersey Shore, he's honed his storytelling skills on real people in unreal situations and has been blessed to work with some incredible people along the way. And then there's the film obsession thing. He loved filmmaking so much he chose to spend several decades writing screenplays in the motion picture business that many survivors have compared to getting steamrolled in a bed of broken glass… on a good day. Spence also chose to write screenplays in a multitude of film genres—a no-no according to one writer's agent… and the agent was probably right, although, because this agent also recommended Linda Seger's book, Making a Good Script Great, the agent is to be commended and hugged. For the record, the genre's Spence chose were fun to work in: High Noon, a remake of the 1952 classic (action), DIG (youth sports drama), Section Eight (comedy), Carny Princess (romantic/musical/thriller), Carville (period drama/romance), The Man Next Door (thriller), Truth Or Die (action), Fiend (supernatural thriller), Triple Threat (martial arts/action), and Maynard (family). So what if he’s had to extract a few pieces of broken glass? It’s been a wild ride.Spence has recently turned his attentions to completing his first novel. The evolution of War World was birthed from his love of science fiction thrillers by Michael Crichton and the fantasy novels of Tolkein and Terry Brooks. The story and characters expanded over time and what was once a single novel has grown to become a multi-book series. Drawing upon his years writing screenplays, Spence crafted a host of characters he believes readers will love to spend time with and in a world as complex as it is mysterious. War World’s cast may not be as crazy as those on the Jersey Shore but whether there is a Survivor amongst the high school students by series end… only time will tell.
Posted by beyond the rainbow at 5:19:00 PM