I have talked a little on this blog about my oldest son Liam, I think I mentioned his IEP meeting in one of my blogs.  so today I wanted to say a little bit more about him.

Liam has some special needs.  Mostly he has issues with his eyes which can cause issues with his coordination.   We also recently found out that he has dyslexia.  Basically what it takes a typical child to learn in a few weeks, it takes Liam a few months.

Last summer we decided to start him in karate because we were hoping that it would help with his coordination, in a way that several years of physical and occupational therapy hadn't really helped. Over the past 9 months we have seen HUGE improvement in his physical coordination and in his self confidence, so much so that his special education teacher at school has been very impressed.

Still I didn't really expect what happened this week.  Once a month he has testing in karate they test him for "tips" of the next belt color and then once the individual has 6 tips they test them for the next belt.  Liam has progressed well, he has gotten about a tip a month since he started. but this week he tested for his next belt.  We took him on Wednesday and he was close but not quite there. On Thursday we took him back and he tried again, he was a little nervous because he had been trying so hard and hadn't gotten it yet. But Thursday night he DID!!!!  He has worked so hard and we are so proud!!!! 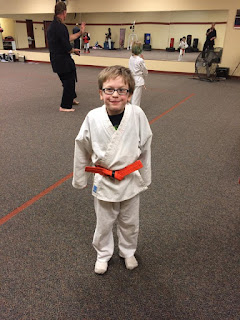 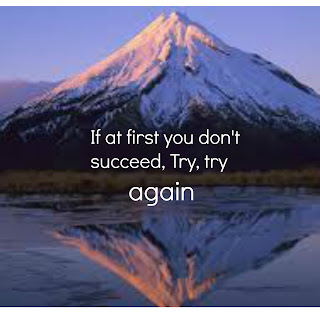